The literal meaning of the Sanskrit word “Prasad” is mercy. So, when we say “Krishna Prasad” we are referring to Krishna’s mercy. Therefore, Prasad means Krishna’s mercy, and Prasad is the remnant of something that has been prepared for the pleasure of Sri Krishna with love and offered to Him for His enjoyment. Because Krishna has tasted and enjoyed the offering, Prasad is not a material thing. Once Krishna tastes something it becomes transcendental. Krishna and Krishna Prasad are non-different.  Skanda Purana explains that irrespective of whether one is brahmachari, grhastha, vanaparashtha or sanyasi, everyone must eat Krishna Prasad. If one eats Krishna Prasad, the living entity derives the benefit equal to that of performing millions of sacrifices.

We are pleased to inform you that we now offer delivery of Krishna Prasad, via post from Sri Vrindavan Dham. Please find details on how to get your blessings (Prasad) from Vrindavan.

Bankey Bihari Temple was established by Swami Haridas a guru of the famous singer Tansen. Once at the request of his disciples Swami Haridas ji sang the following verse in Nidhivan, Vrindavan

On singing the verse, the Celestial couple Radha Krishna appeared in front of him and his devotees. At the request of Shri Swami ji, the couple merged into one and the idol of Banke Bihari appeared there (the same idol is seen in the temple)

The image of Bihariji installed in Shri Bankey Bihari Mandir is the one granted to Swami Haridas by the celestial couple Shyama-Shyam themselves. Submitting to the desire of devotees, The Lord appeared in person with his divine consort and left-back a black charming image before disappearing. 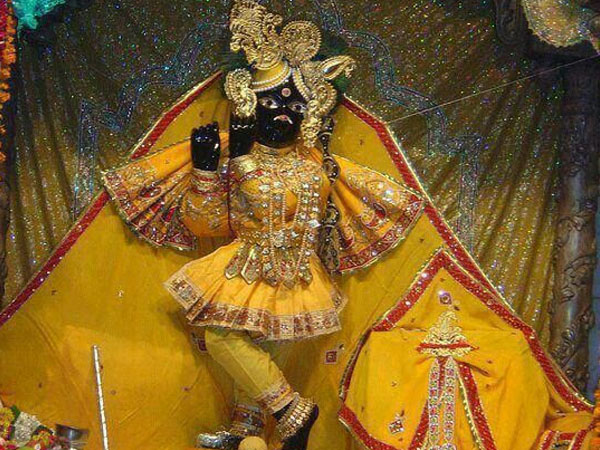 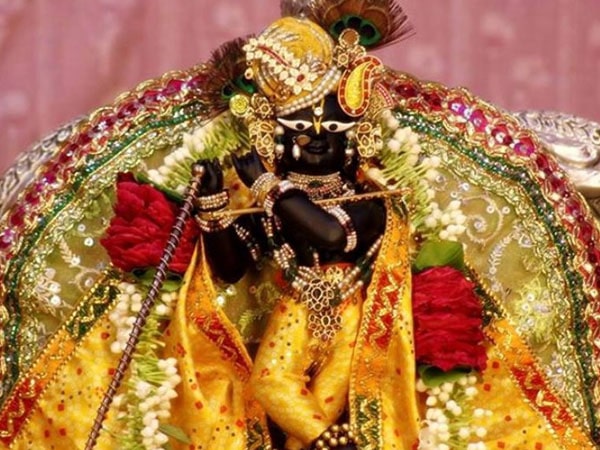 Radha Raman means the lover (ramana) of Srimati Radha. is an early modern period Hindu temple in Vrindavan, India dedicated to Lord Krishna as Radha Ramana. It was constructed at the request of Gopala Bhatta Goswami at around 1542 AD.This temple is among the 7 temples of Thakur of Vrindavan including Sri Radhavallabh ji, Shri Govind Dev ji and four others. The temple is exquisitely crafted and one of the most revered temples in Vrindavan, especially by the followers of Gaudiya Vaishnavism.It houses the original shaligram deity of Krishna alongside Radharani

The Sri Sri Krishna Balaram Mandir, situated in the Raman Reti area of Vrindavan, holds a special significance for the devotees of the International Society for Krishna Consciousness. This grand temple represents the fulfilled dream of Srila Prabhupada, Founder Acharya of ISKCON, who wished to construct a temple of unparalleled beauty for the worship of the transcendental brothers Krishna and Balaram in the same village where They played more than five thousand years ago. Srila Prabhupada directly oversaw all the aspects of design and construction and personally called the Lord to come and accept the worship of His devotees from around the world. He said, “Lord Balaram is the source of spiritual strength, and I have built this temple just to give strength to the devotees”. 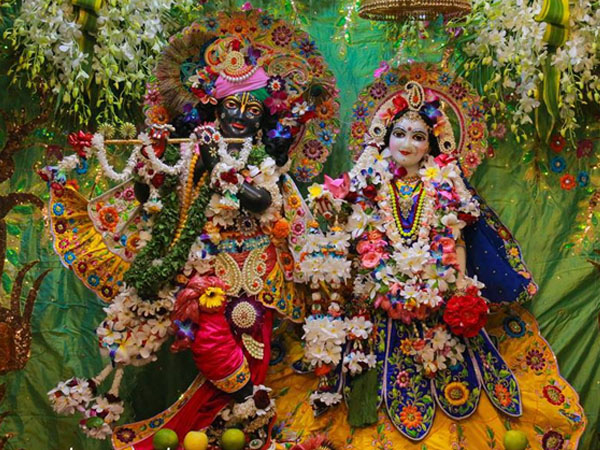 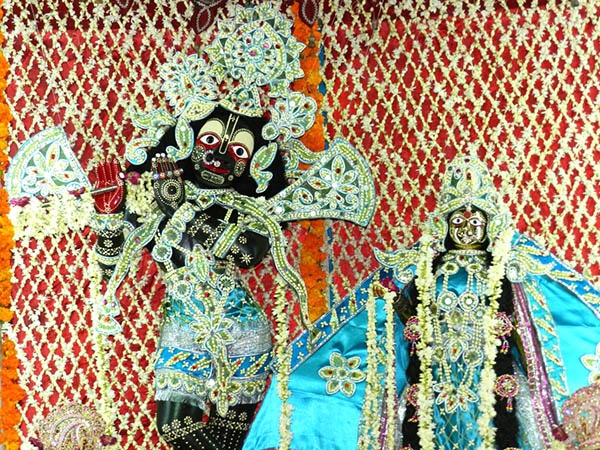 The temple of Sri Sri Radha Shyamsundar has carved a special place for itself in the hearts of all the Vaishnavas because it houses the most beautiful and unique Deity of Sri Shyamsundar, that manifested from Srimati Radharani’s heart. Srila Raghunath Dasa Gosvami and Srila Krishna Dasa Kaviraja Gosvami, who would otherwise never leave Sri Radha Kunda, also started visiting Vrindavan for the darshan of Sri Shyamsundar, despite their old age and physical problems Sri Shyamananda prabhu was personally graced by Srimati Radharani. She gave him a nupur tilak of the shape of Her lotus foot and the transcendental and divine Deity of Sri Shyamsundar.

The place is known as Seva Kunj because Lord Krishna used to do seva (selfless service) of Radha and helped her get ready for Raas Leela (a holy dance). Seva Kunj was discovered by Swami Hit Harivansh in 1590 It has a beautiful temple dedicated to Radha Krishna which is also known as Rang Mahal, where Radha and Krishna used to perform Raas Leela along with other gopis of Vrindavan. The temple gates get closed after sunset and no one is allowed to enter the temple after evening aarti, as it is a local believe that Radha Krishna still perform Raas Leela and no one is allowed to see this divine spectacle. Even the monkeys which crowd the temple in the daytime, desert the temple after sunset. A little distance away from Seva Kunj is sacred Lalita Kund, which is believed to have been constructed by the flute of Lord Krishna to quench the thirst of Lalita Devi. 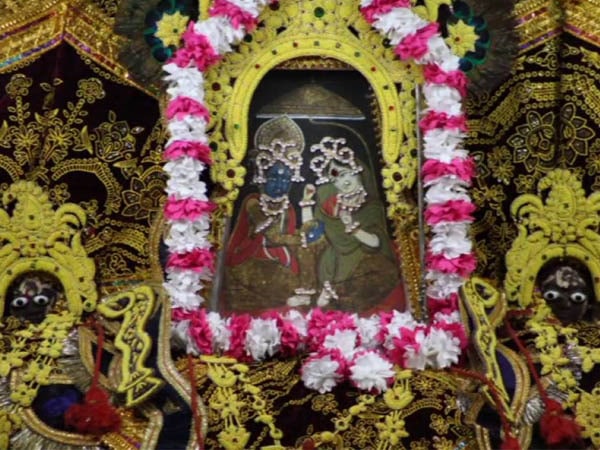 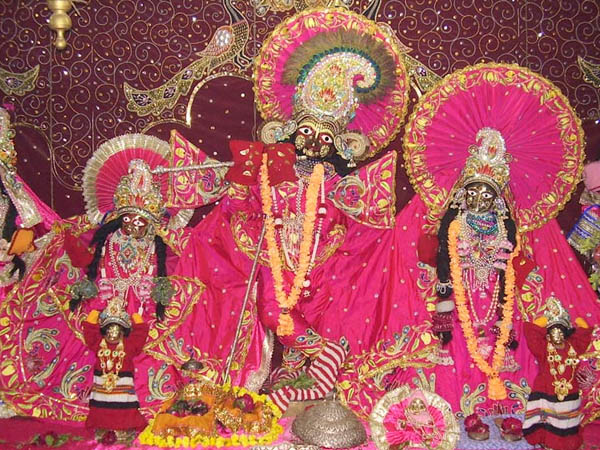 Sri Madan Mohan temple is built by Srila Sanatana Gosvami near the Kali Ghat in Vrindavan (Uttar Pradesh). It is believed that in ancient age, Advaita Acharya noticed and unearthed the main Madana Mohan deity from advaita vata tree base in Vrindavan. He discovered this deity where he regularly go for yajna and bhajan (prayer). Going with years, Advaita Acharya teached and handed the responsibility to worship Madan Mohan to Purusottama Chaube, who then passed it to Sanatana Gosvami. Radharani and Lalita are also worshipped in this great temple from years now. Purusottama Jena had sent them to this holy land of Vrindavan. 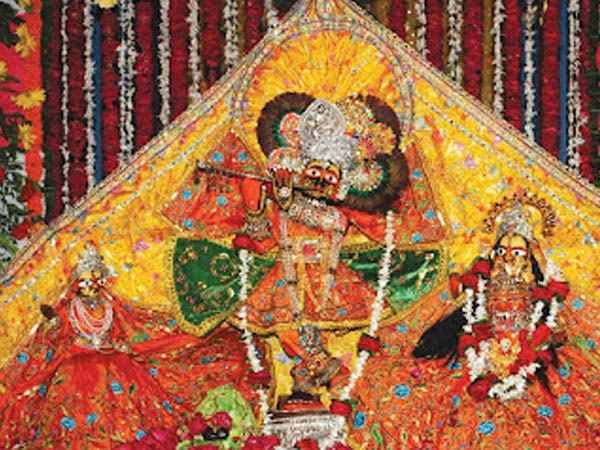 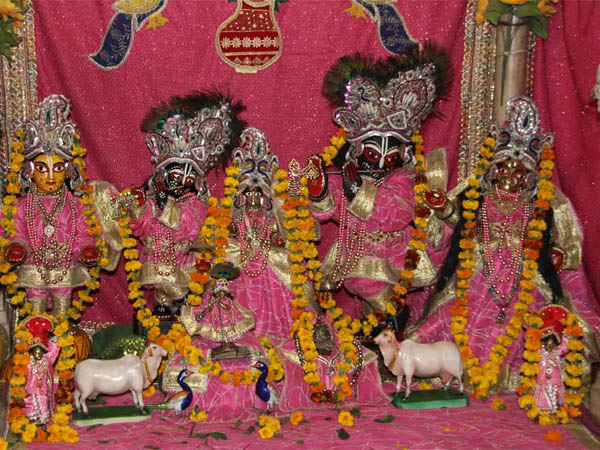 Radha Gokulananda Temple was perceived by and was built with the help of Viswanath Cakravarti. There exist deities of Radha-Vinoda, Vijaya Govinda, Radha Gokulananda and Caitanya Mahaprabhu. Earlier all the deities were worshipped in their respective temples. It was the vision of Vishwanath Cakravati who brought all the deities to be worshipped together under one single temple. In this temple there is the small Radha-Vinoda Deities of Lokanatha Gosvami, the larger deities of Vijaya Govinda of Baladeva Vidyabhusana, and the Radha Gokulananda Deities of Viswanath Cakravarti. The small deity of Krishna in front of Gokulananda and the Deity of Caitanya Mahaprabhu were worshiped by Narottama Dasa Thakur. Viswanath Cakravarti arranged to have this temple built. Formerly, all the Deities in this temple were worshiped alone, in their own temples. The samadhis of Lokanatha Gosvami, Narottama Dasa, and Visvanatha Cakravarti are located in a small courtyard next to the temple. Lokanatha Gosvami did his bhajana in this courtyard and left his body at this place. In Narottama Dasa’s puspa samadhi are his garland, kaupins, cloth and mala. Viswanath Cakravarti Thakura entered samadhi in 1674.

During the oppression of Aurangzeb, the original deities of Gopinathji, Radhika and Jahnava also proceeded to Jaipur together with other deities. The Pratibhu Vigrahas now preside in the temple built by Nand Kumar Vasu. Jahnava Thakurani is seated on the left side of Gopinath, and Lalita Sakhi and a small deity of Radhika are seated on His right. The deity of Mahaprabhu Shri Gaurasundara is in a separate chamber. In 1632 AD, the original temple was built by Ray Singh, the son of the king of Bikaner, Maharaja Kalyanamala of the Rathaur dynasty. Aurangzeb destroyed this temple. The Pratibhu Vigrahas were established in 1748 AD, and the new temple was built in 1819 AD. Near the new temple to the east is the samadhi of Madhu Pandita. Close to the famous Vanshivat, on the bank of the Yamuna, Shri Paramanand Bhattacharya and Madhu Pandita used to worship Shri Radha-Krishna Yugala with extreme renunciation. 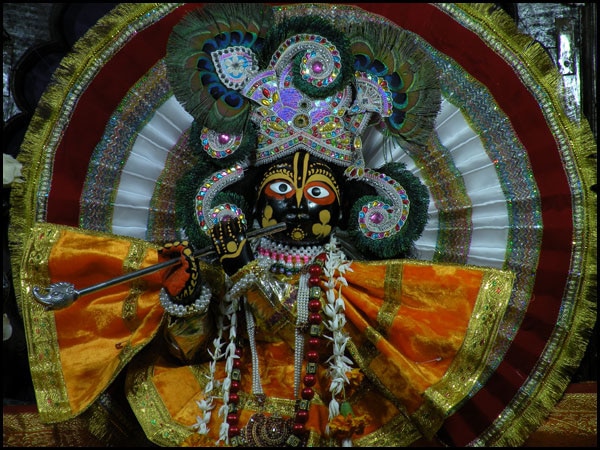 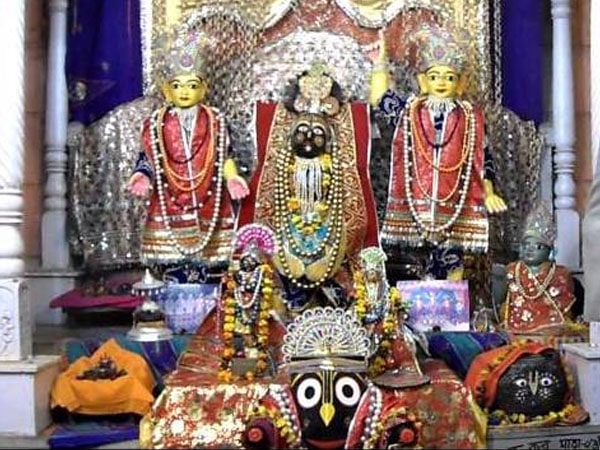 The temple is dedicated to Govind Dev Ji (Lord Krishna).This temple is among the 7 temples of Thakur of Vrindavan. Govind dev ji was removed from vrindavan when the muslim emperor Aurengzeb tried to destroy it.The original diety is now in jaipur. Govind dev ji temple is  one amongst the major tourist attraction of vrindavan.

Radhavallabh Temple is situated near Sri Bankey Bihari Temple. According to popular legend deity of Sri Radhavallabh is not made by sculptor. The deity was given to a devotee named Atmadev by Shiva himself because of his arduous devotion and prayers The Hith Harivansh Mahaprabhu lived in place called Devavan. In the age of 32 he left for Vrindavan. On his way to Vrindavan, he dreamt and ordered by Radharani herself to marry the daughters of Atmadev and took the idol of Radha Vallabhji to Vrindavan with them. As ordered, Hith Harivansh Mahaprabhu married the daughters of Atmadev and Atmadev gifted the idol of Radhavallabh ji to his daughters and Harivansh Mahaprabhu on their marriage.

The stands out due to its striking architecture and magnificence decor. It was constructed in 1585, the Radha Vallabh temple is one of the oldest and long-living temples, majestically built using red sandstones. 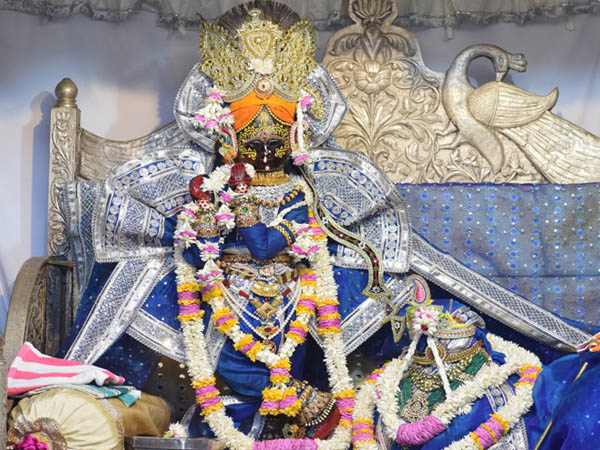 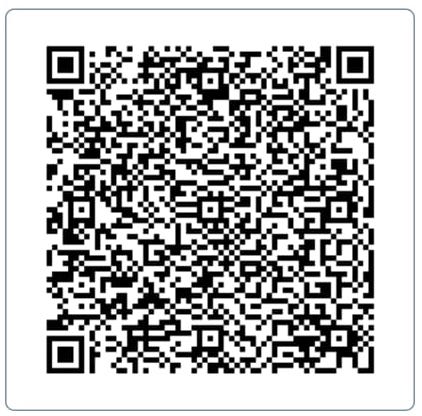 Scan This Code to Pay 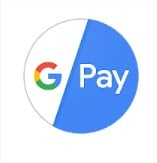 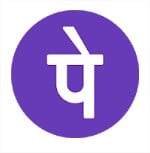 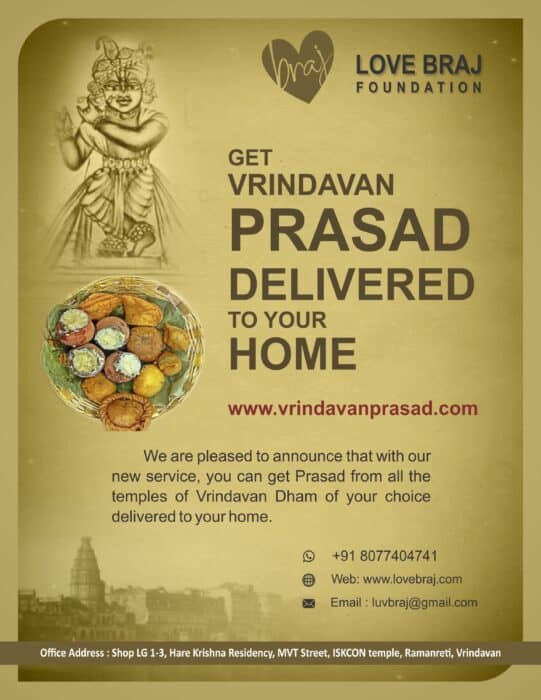